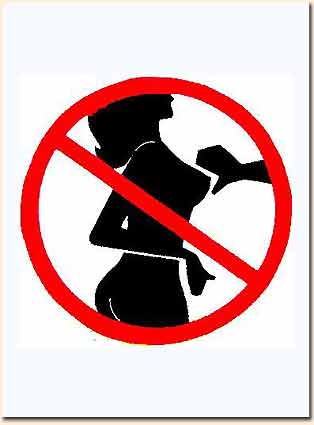 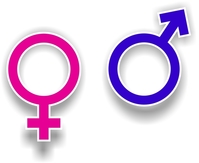 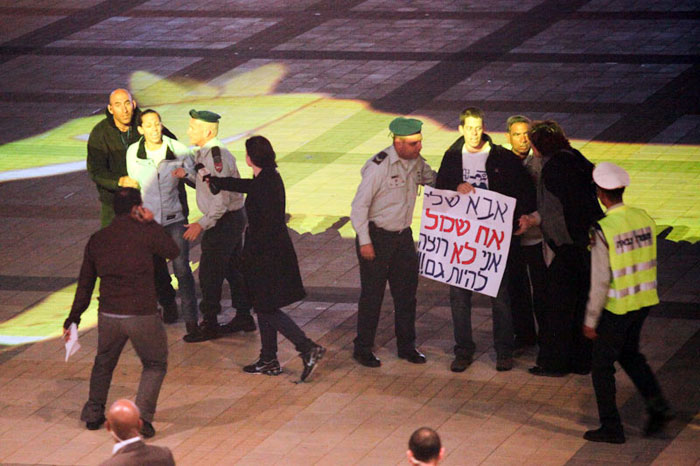 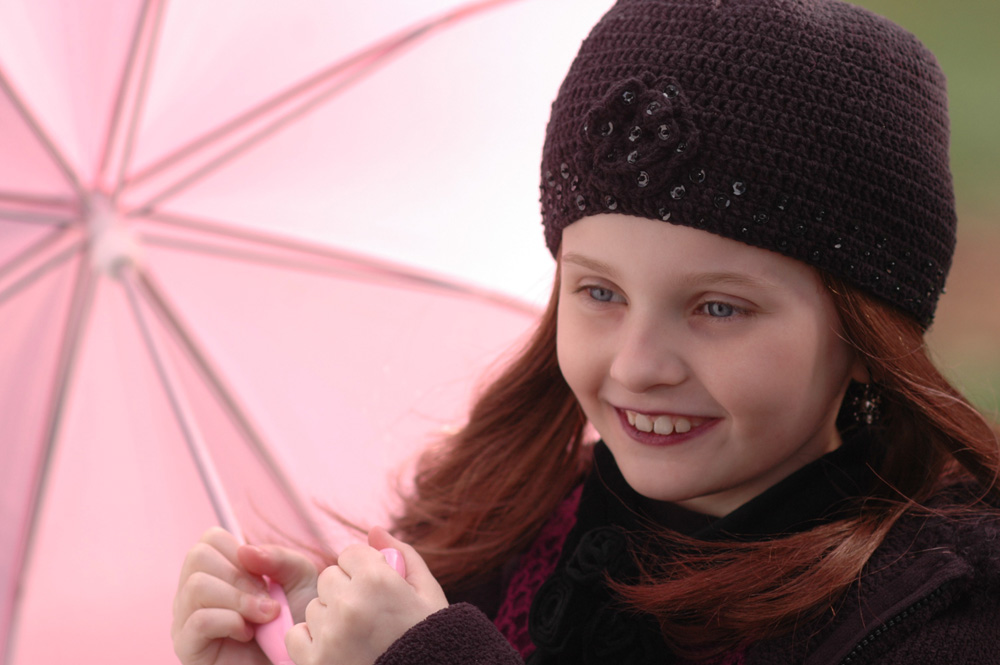 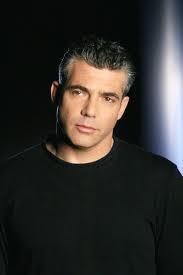 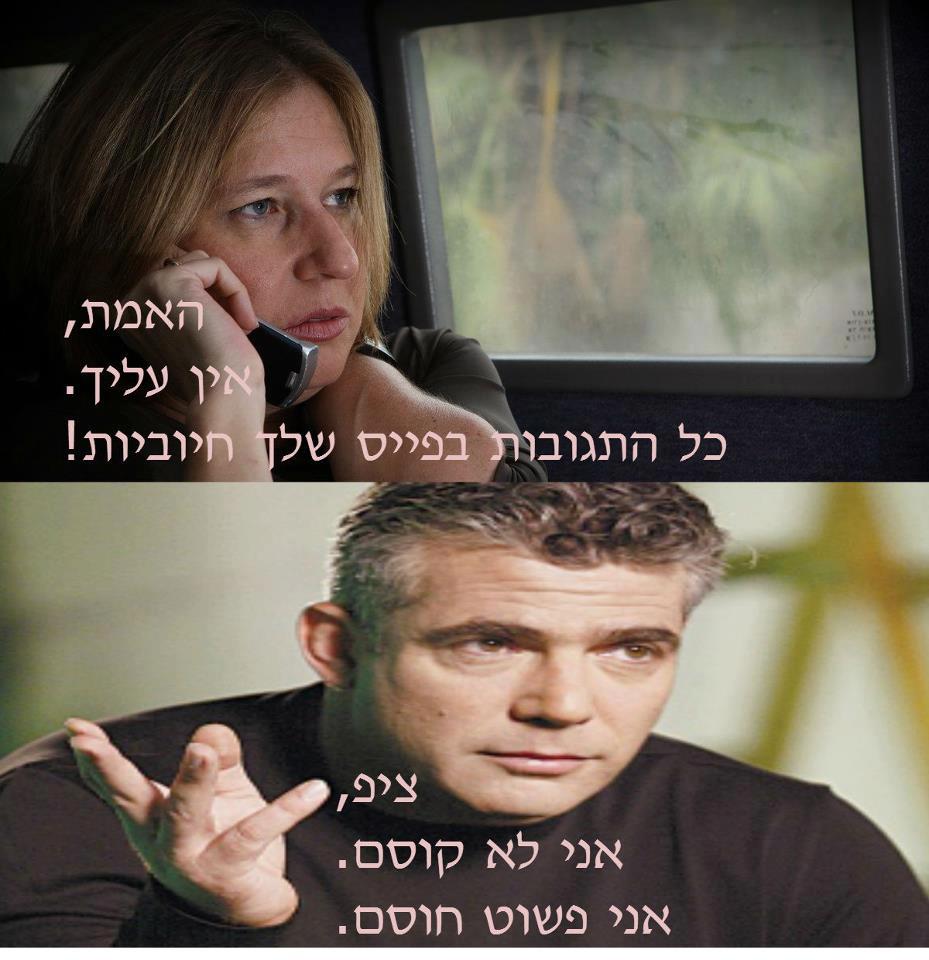 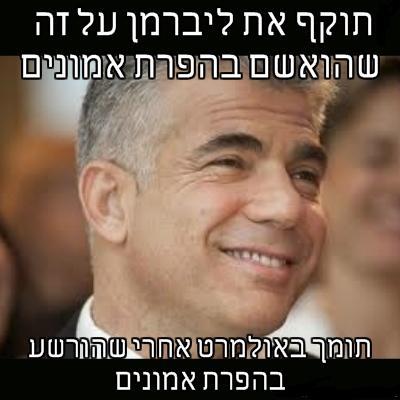 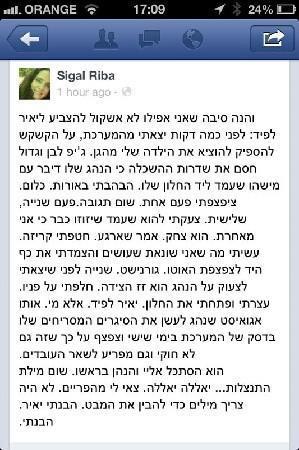 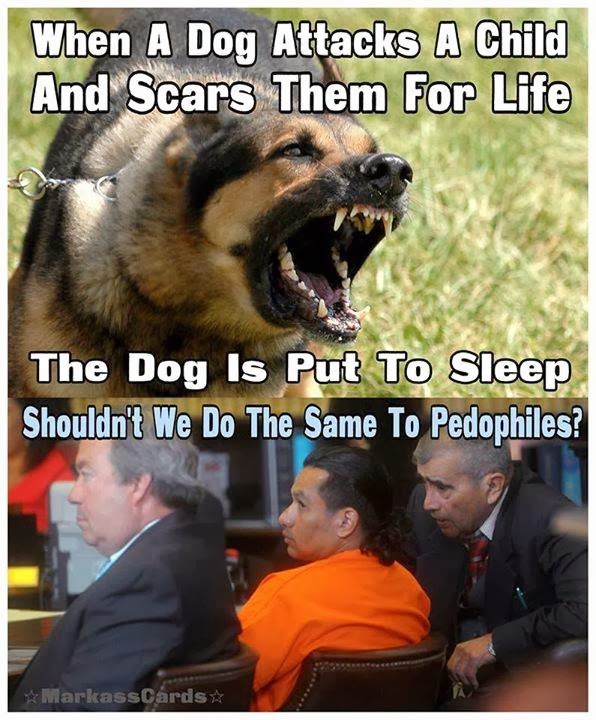 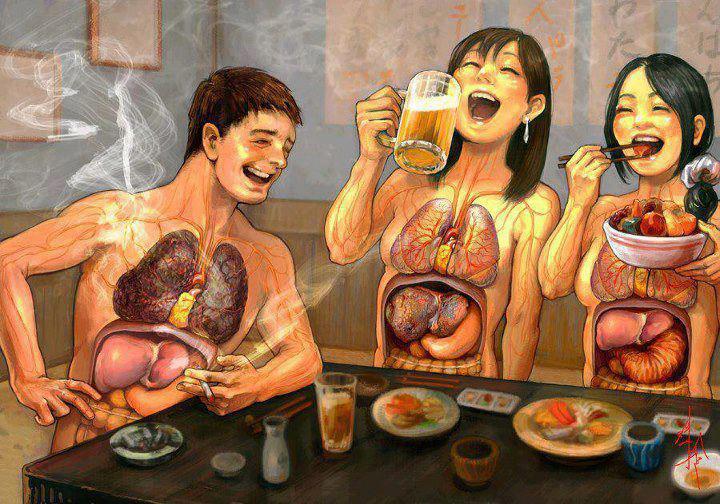 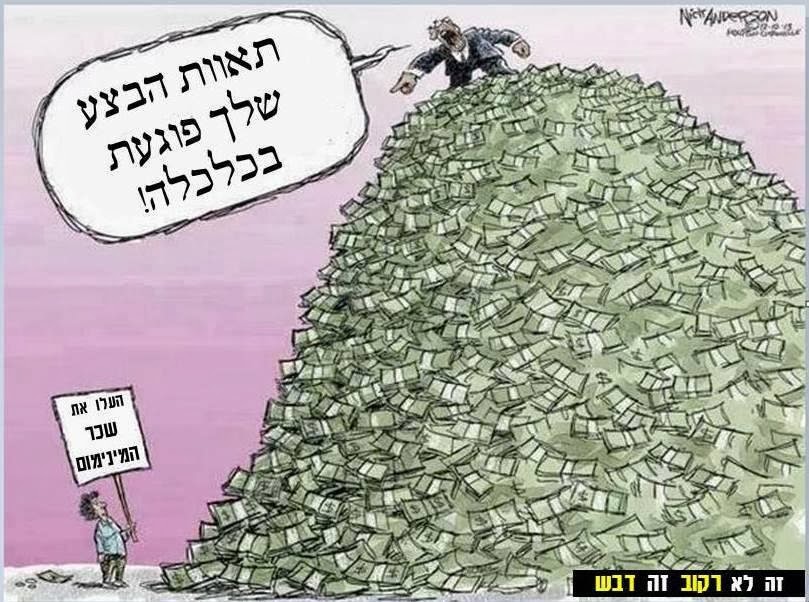 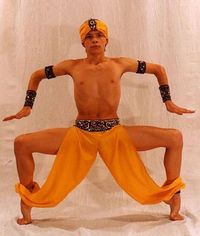 The relationship between Palestinians and Palestine 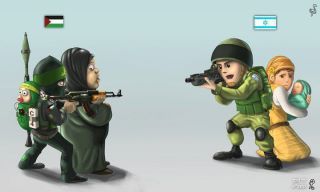 Read some amazing comment someone replied Arabs of Haifa claimed that the Land of Israel is the Palestinian people. The article is titled "Lieberman, we'll step on you." Response of the Israeli Arab woman responder named Samer this article brought the sliding Drora [her freedom] comment.

This is what Samer (from Haifa) wrote: We are not Arabs in Israel ... We are Palestinian citizens of Israel. And our citizenship is a passport that includes technical and Israeli identity card that we present at the request of government. We have a nation. We are Palestinian Arabs. We are not Arabs in this country, Israel, and we do not agree to be attributed to it at all.

You [Israelis] are without nationality. You have a religion called Judaism!! And you belong to this religion, nothing more! Your only creation is Hebrew. Else, there is one thing you've managed to create in the 58 years of settlement here [in Israel] as occupiers on the land of another!!.

You simply with no culture, and no it was justified arrogance. You simply people who exile, arrival brazenly, to realize the right to self-fulfillment, the expense of this right of another. You murdered the peace that Rabin shaped!

So ..... Shame on you, because we have nothing to talk to you. And I avoided any sweeping generalization here. I have Jewish friends who are like my brothers, and I admire them very much, but there are people that are denying the existence of another. 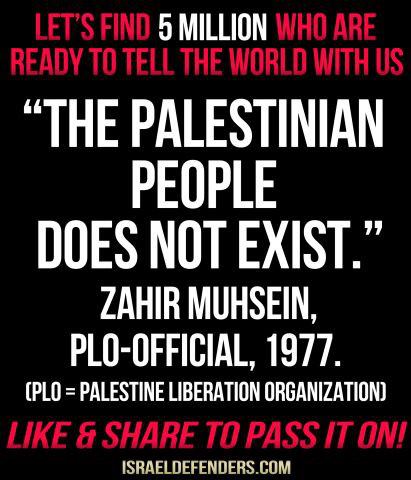 Now lets make it clear - here is entire quote of a PLO executive committee member Zahir Muhsein, in a 1977 interview with the Dutch newspaper Trouw. Palestinian state is only a means for continuing our struggle against the state of Israel for our Arab unity. In reality today there is no difference between Jordanians, Palestinians, Syrians and Lebanese. Only for political and tactical reasons do we speak today about the existence of a Palestinian people, since Arab national interests demand that we posit the existence of a distinct 'Palestinian people' to oppose Zionism.
SHARE some truth with your friends and family...even their own leaders admit that there is no such thing as the "palestinian" people. Here is the entire quote, please read this carefully:


"For tactical reasons, Jordan, which is a sovereign state with defined borders, cannot raise claims to Haifa and Jaffa. While as a Palestinian, I can undoubtedly demand Haifa, Jaffa, Beer-Sheva and Jerusalem. However, the moment we reclaim our right to all of Palestine, we will not wait even a minute to unite Palestine and Jordan."  (PLO executive committee member Zahir Muhsein, in a 1977 interview with the Dutch newspaper Trouw.)

Open your world map, an Israeli Arab. You will find in that the Arab states (22) is bigger than the continent of Europe and the territory of all the Muslim countries (56) covers about a third of the Earth. Unimaginable huge space. Resources of oil and unfathomable riches. So on the face of it, it's just fine that the Jewish people will be in one small country of its own, without having to share it with another Muslim Arab, no? 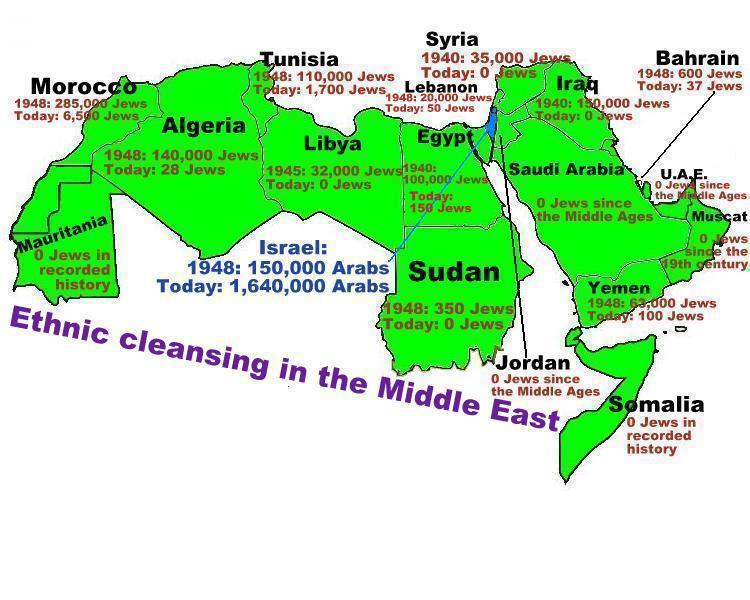 And let me tell you a few words on the People "Palestinians". You are not a people. You are a Muslim fiction one single goal - to conquer the Land of Israel.

Let's start with your name: Romans conquered Israel called it as act of occupation, Frobinika Palestine 'after the Philistines who were the Israeli coastal cities. The Philistines were the red-haired sailors who reached the shores of Israel from Europe and disappeared from the area about 1,600 years before the birth of Muhammad. No Arabs from the Arabian Peninsula, any connection to those Philistines - not genetic, not religious, not cultural, historical or geographical. You are Arabs and not Philistines. Romans could equally call on Israel Frobinika Switzerland. Would that have made you Swiss?

As to Israel, Samar from Haifa ....Choose any historical documentation, all historical map, any historian accepted by the International Academy show us where to Palestine, when was ever in human history state or country called Palestine? When was ever in human history was the "nation" called Palestinian people? Who are you? From where you are and what your relationship area of ​​the Land of Israel? 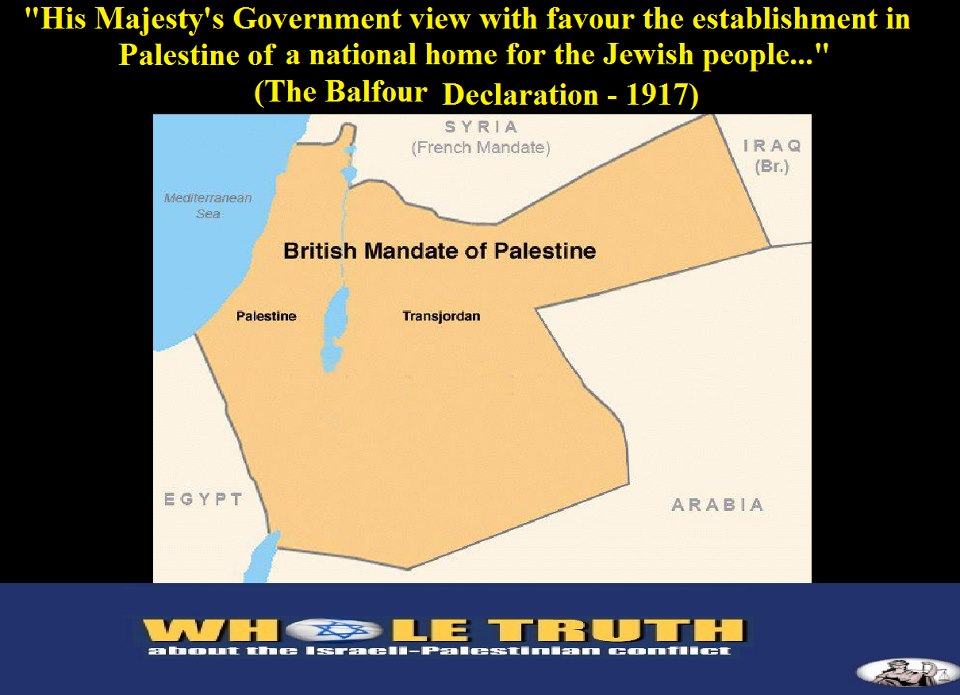 I can not find even one individual anywhere in the world, has not in Muslim and Arab researchers (including the Koran that claims that the land of Israel called the land of Israel, and the land belongs to the Israely people) reinforce the you have presented. There is a British record from the British Mandate, documentation from the Ottoman Turk, a record of all the conquests were the Land of Israel - there is no mention Palestinian people and a Palestinian state.

Well, let's agree that if you find any documentation (not part of the Palestinian propaganda retroactive changes historical facts) being and existing in Israel, we already have something to start with. You are a cluster of cases of streams and Phalangists from around the Muslim world, who hate each other almost almost like you hate us. It's actually the only thing that unites you - hate Zionists. Is based on a miserable drive back with!

In 1948, the number of Arabs in Israel is the same number of Jews living in Arab countries. Twentieth century was a century of migration and population exchange across the entire planet. All Jews from Arab lands emigrated to their homeland in Israel. All Arabs from Israel were supposed to have returned to the United Arab homeland. Not only did not do that - you continued to infiltrate and penetrate into Israel every sophisticated form imaginable, and its policy of Israel's feeble has allowed you. 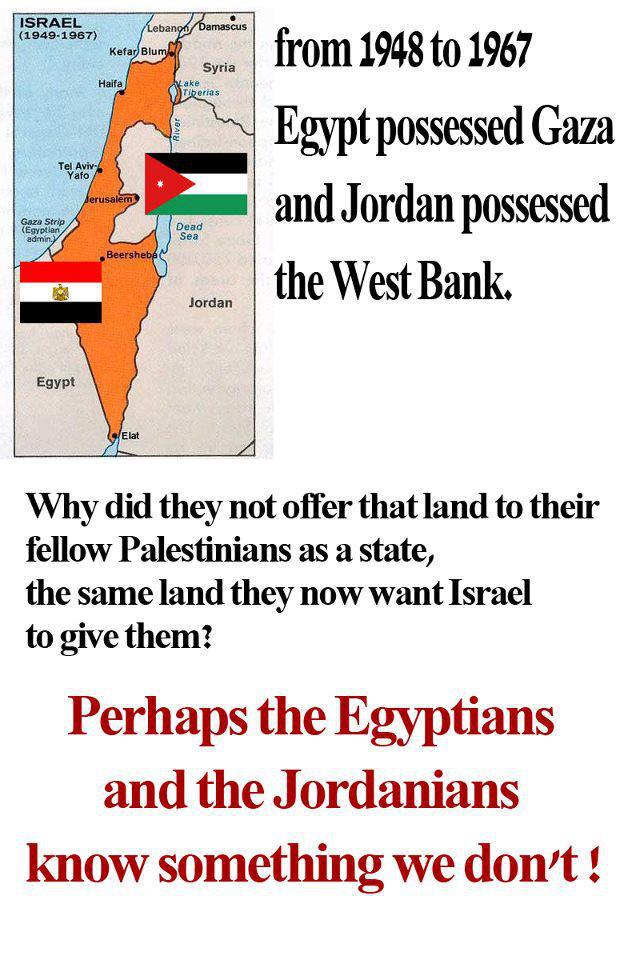 Today you actually have a Palestinian state, Jordan. But you want to yourself, "New Palestine" to be established in the Gaza Strip and the West bank, and of course Israeli Arabs identify themselves as Palestinians continue to live in Israel, and bring them more and more "brothers" Palestinians from around the world. Thus, in a decade or two the Jews will be a minority in their own country. Jews and Israel will become Palestine. It is not suitable for us.

So that's what eventually happens, even if our left diffuser illusions that fill your heart with great hope: you will need to return to your homeland. It will happen neither in good or sword. Over the years (with the Zionist settlement) you adopted yourself the Jewish ethos, that is - the sanctity of Jerusalem and the right of return to Zion. While you built a mosque in the center of the Jewish sanctuary (a common Muslim practice in our world), but your holy city is Mecca, not Jerusalem and you have the right of return only to only to the Arabic state that marked as your homelands. 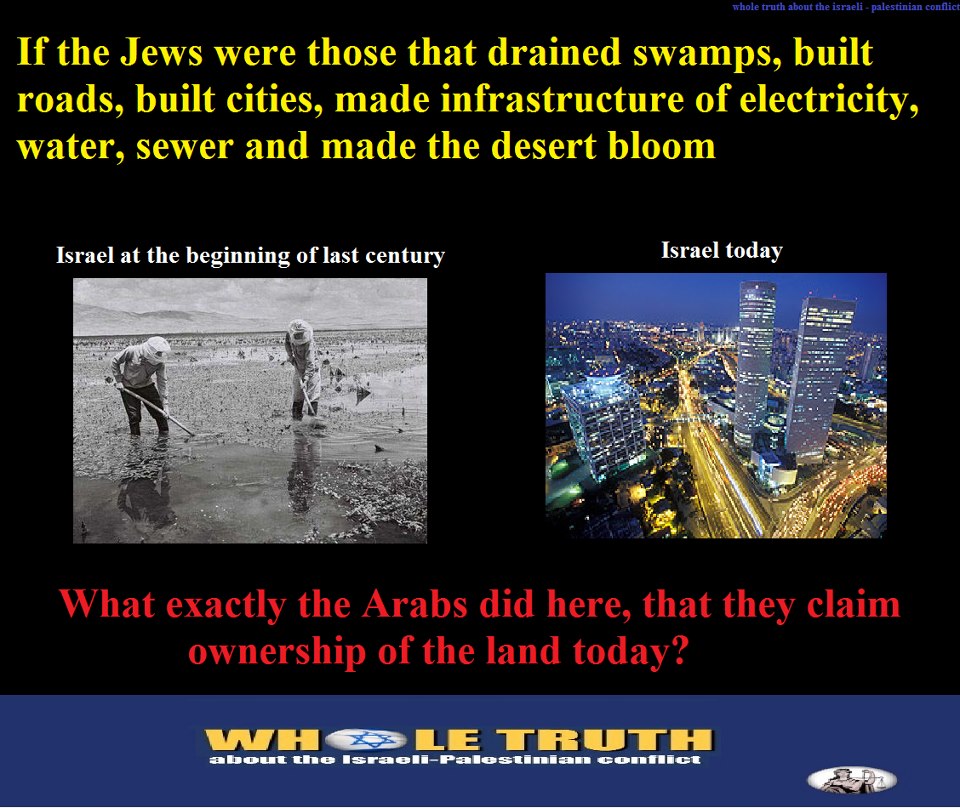 In conclusion, I refer you to tell me kindly and humorous. Called "The Innocents Abroad" and it was written by an author named Samuel Longhorn (commonly known as Mark Twain) in 1867. He toured the length and breadth of Israel. He did not see Palestinians here, not lush gardens, no Arab villages and bustling cities. Nothing. He saw and described neglected, swamps, cholera, malaria, sick. "Land of Tears", as he called the Land of Israel. All there is here, in this paradise called Israel - the Jewish promised land.

No wonder you and your brothers covet it! And if you're sitting in your home connected to electricity and typing an answer on, it is that the Zionists arranged a state that allows you to live a completely different and better level than 99% of your sisters in Arab countries ..


Me, an Israeli Jewish citizen, owns the place!! 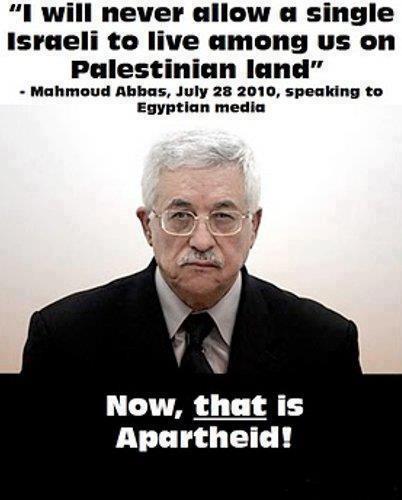 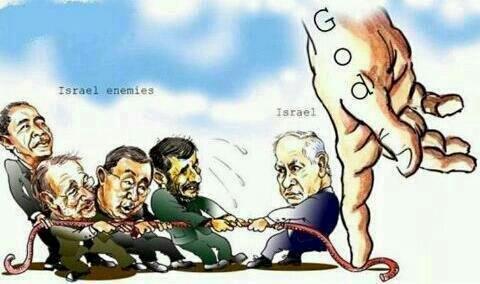 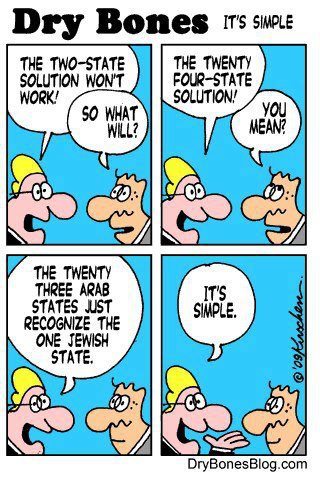